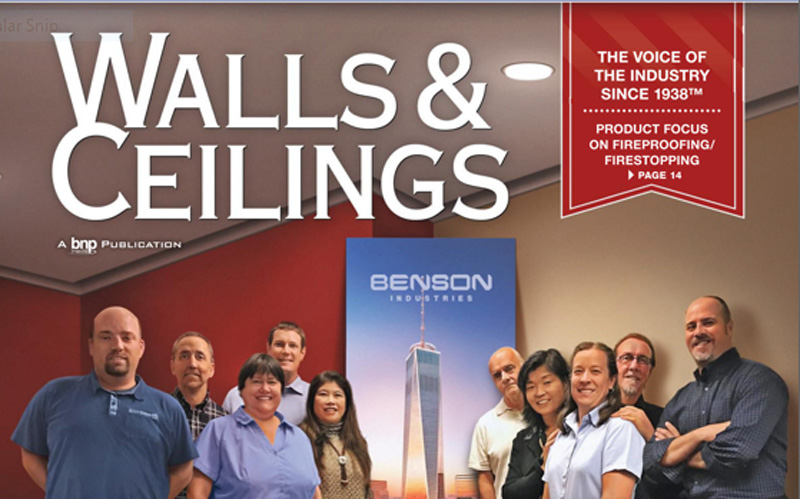 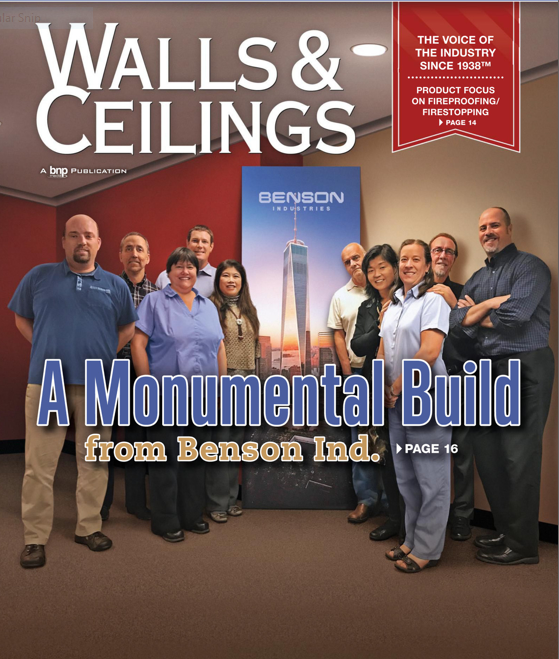 A Look into One World Trade Center: A Monumental Build

The planning, design, and construction that went into One World Trade Center was a monumental undertaking, with world-class workmanship throughout.

The Balanced Approach to Life Safet

Panes of seemingly endless, gleaming glass climb a symbolic 1,776 feet in the sky, disguising a stainless steel frame. Viewed from the bottom, the triangular building façade rises to a point. From afar, it’s an obelisk, a meeting of eight isosceles triangles. And on the 50th floor, you’re enveloped within an octagon.

The planning, design, and construction that went into One World Trade Center was a monumental undertaking, with world-class workmanship throughout. Benson Industries, curtain wall contractors, long focused on high-rise and custom-unitized curtain wall systems, was awarded the momentous project and took on the challenge of meeting the building’s rigorous performance requirements and inventive design.

The contractors do not offer a standard product, but rather, a standard design philosophy with respect to how they take on performance requirements.

“In essence, what we’re noted for is that we can come in and basically design a wall system that achieves the architect’s aesthetic, while at the same time being high-performing,” says Jeff Heymann, Benson Industries’ vice president of Business Development. A fitting philosophy, given that the contractor’s two major challenges with One WTC were its stringent life-safety requirements and never-done-before exterior. “The key was, how to handle the stainless steel chamfered corner that was sloping, and also do it in a curtain wall that had to be robust enough to withstand certain security concerns.”

When it came to meeting building code and security measures, Benson Industries had to be intentional in addressing fire containment, and looked to Owens Corning Thermafiber for support.

Prioritizing Fire Safety
“Here we have a wall that’s really a curtain wall running by the slab,” explains Heymann. “We have a block design, so the anchoring system has to be quite robust. Also, the space in between where the wall is and where the edge of the slab is—we need to make sure we have a fire containment system that works. And because of the nature of the anchorage, there was no existing system that had really met [code], that had been pretested. So as we designed a curtain wall, and as we designed the perimeter fire containment system, we needed the help of Thermafiber to review the details of these updates and provide an engineering judgment.”

The highest level of engineering and evaluation for fire safety was needed in the building—and began in the design phase. Unlike curtain walls that are specific builds, unitized curtain panels are made of elements fabricated, assembled, and often pre-insulated in factories before install. Many of the components required to maintain the fire performance of the exterior wall are implemented then, and so it’s critical for the curtain wall contractor and manufacturer to collaborate early on, ensuring the panels will perform to the highest level of fire performance. In addition, extra layers of safety in the curtain wall system were incorporated to account for any unforeseen variables and conditions.

“When evaluating the fire performance of a building, there are many factors to consider in regards to fire spread in a high-rise building,” says Angie Ogino, Technical Leader at Owens Corning. “Factors such as means of egress for occupants—typically escape routes are limited to elevators and stairwells. Therefore, evacuation time becomes critical. Also, considerations such as the height of these buildings, where it’s very difficult at a certain level to be able to extinguish the fire from the exterior—the lack of water pressure up to these floors results in fire personnel having to attack the fire from the interior of the building. Other variables such as the fuel load of contents on particular floors, or what direction the wind is blowing, can contribute to increased fire spread and are difficult to predict.” Although all safety elements such as detection and active systems should be considered for providing the maximum fire protection to address these factors and unpredictable situations, Owens Corning evaluates and provides solutions for the passive element, which is the perimeter fire barrier system.

Create a Seamless Solution
Architectural firm Skidmore, Owings & Merrill designed the building to look as if there was a single grasp from stack joint to stack joint, from floor to floor. “If you look at the building, it’s just a little seam,” says Jim Giger, National Accounts Facade Manager at Owens Corning. “So it looks almost like it’s all glass and there are no floors. There is no aluminum structure to be able to segment fire zones.”

The challenge lied in the intended look from the exterior of the building, which did not allow for a curtain wall that would match any listed perimeter fire containment assembly.

A solution was devised in the creation of a proprietary impasse assembly, formulated of custom insulation hangers designed to secure the insulation in place so that during a fire, the material doesn’t dislodge and cause an early failure. While also meeting code and exceeding performance requirements, the impasse assemblies are highly labor-saving and innovative because of their ability to perform so well in desired conditions.

“With the performance of the [impasse fittings], and the test data we had derived from testing those fittings in the given assemblies, we were able to develop an engineering judgment to allow them to construct it so they had the look they wanted,” says Giger. “And with the fire performance that’s required by code.”

A New Enduring Icon
While constructing New York City’s most iconic building—and the tallest building in the western hemisphere—brought challenges, it also brought solutions. The impasse assembly developed for the custom curtain wall delivered on the building’s most important need of safety, without sacrificing the architect’s design.

“For the thought leaders on this building, that was their number one priority—occupant safety,” says Ogino. “It was great to be a part of that. When I’m in New York City and I drive by that building, I think of all the hours and time we invested in it. It’s truly something to be proud of.”

For a building designed in memorial, and built to endure, it also brought honor to those who helped construct it. “Everybody who worked on the project—from print clerks to our field crews to anyone who touched it—was really filled with such a sense of pride to be on the project,” says Heymann. “It was an incredible experience. It really is a part of who Benson is.”